I have just downloaded and installed the latest version of the ctrlX Core firmware. I have got now RM22.07 version on Core and FWA-XD1-AXS-V-0312N-NN.00 firmware version on the Drives. 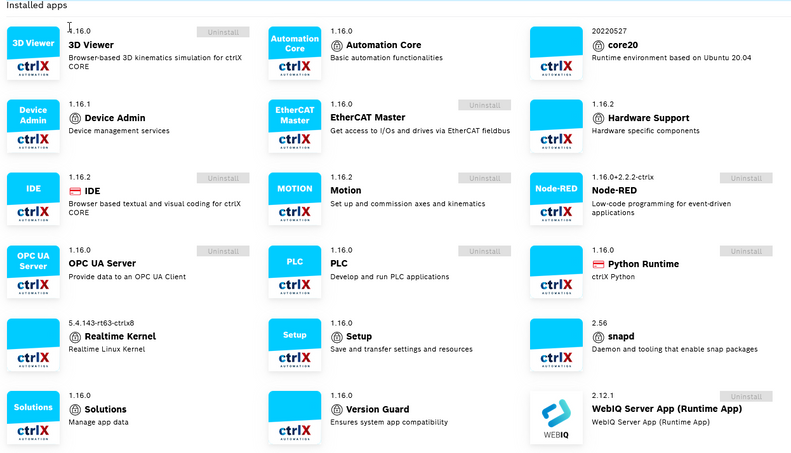 The problem is with those 4 licenses which I marked on the second picture. After the restart it is the same and also after re-installation of those apps it is the same.

Have got anyone such a problem with licensing?

It is also weird, that despite described problem, I am able to open the IDE Visual Coding and do something. So I don't know what is going on with licenses on my Core.

That seems to be a bug of the single apps. The apps have to fill up these fields with some content. If not the displayed text will be like yours.

Just want to share info about similar trouble with DeviceBridge. App is installed and licensed with trial. But app does not recognize license and shows status "not licensed", the licenses setting shows "app not installed".

EDIT by @CodeShepherd: See this thread as reference.

@Michael_A Can you please specify "these fields" or point out where to find that information so we can do that?

Hello,
this information should be provided in the Package-manifest of your app.

I just updated my ctrlX Core to v1.16, and I am get the same message "App not Installed" for IDE and Python Runtime.

When I click on the App, I see a red icon with the message "This app requires a license".

Like @Michael_A mentioned here: This is a new function of our ctrlX CORE Web UI and not all apps implemented it already in prototype version 1.16. So this is an indication error only. The app will recognize your license and will work, even this is shown.

You can get rid of it by installing the latest version of theses apps as soon as they are released.

I have the same problems as described above.  But some apps are not available for use.   In my case, the VPN client and Python app have two problems: 1. No license is recognized, as described above and 2. no app configuration is available in the configuration tree.  You can see this behavior with the Python app in the pictures above.  Perhaps there is no configuration dialog for the Python app, I'm not as familiar with it but I am fairly certain there should be one for the VPN Client as I have used it before.

For the VPN Client app, I am using version 1.14.0 as I did not see one for 1.16.0.  So it seems that previous apps have the same problem sometimes.

@ctrlXnovo version 1.16 of the "VPN Client VPN-V-0116.2" is not yet released. See this thread for further information.

The python runtime app has no interface in the ctrlX CORE web UI. If there are other parts missing I would recommend to empty your browser cache and reload the page to be sure that the actual data is used. If this does not help I recommend to wait for the new version and try again.