I have downloaded the sample drive connect app. However, the app is not finding the drives on the Ethercat bus. Is there something else that needs to happen to enable the functionality? Is there documentation available for this app?

it sounds like you have connected the drives via Ethercat.

The Ethercat needs to be at least in PreOp state. It is recommended to activate the EoE mailbox for drives but SoE would also work.

The interfaces will be scanned and will be listed in datalayer.

EoE must be enabled from ctrlx IO and IP traffic must be forwarded to that port.

We can see how Drive Connect makes the drive parameters available in the Data Layer, and also the drive diagnostics appear in the ctrlX CORE diagnostic log. How do we access the backup/restore and firmware update features?

@CodeKnecht, I will extend @bschmidt question to ask, how can we generically access a device. If I have an applicaiton with Axis name "X" how should that correlate to the SN of the axis so that I could pull the diagnostic log on a regular interval.

I think the drive address and name in S-0-0142 should designate the drive under Devices>Drives, rather than the SN. If a drive is connected to an Axis via Axis Profile, then the name given for the axis should be copied to S-0-0142 automatically.

I hope eventually Axis Profiles will automatically link the MDT/AT items to the corresponding elements of the axis structure. So the user can specify the EtherCAT address of the associated drive but not have to check all these boxes. Also the user would expect that the scaling he sets for the Axis will be copied to the drive automatically so that he doesn't twice have to set Translatory, Absolute, mm, etc. I guess these comments are meant for the ctrlX MOTION app, but I thought maybe Drive Connect would help with this. 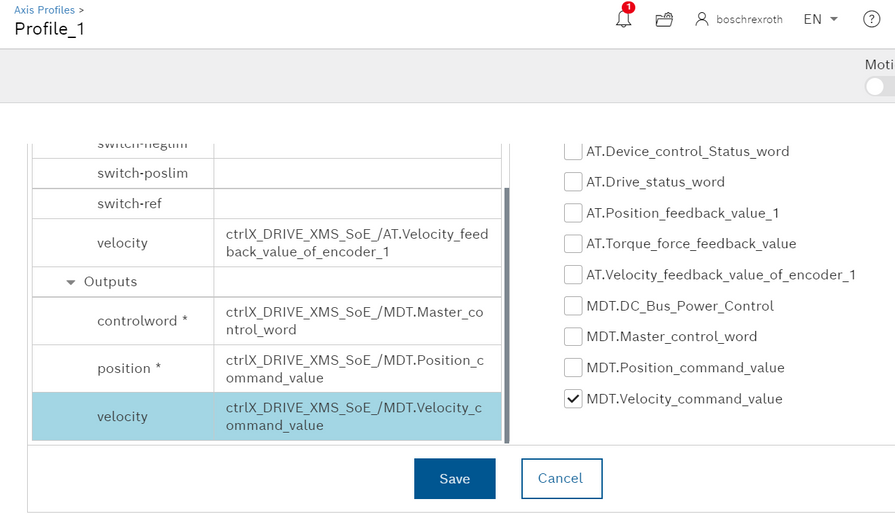 I will send you the documentation for firmware update and restore function as soon as available.

Regarding the questions how to correlate SN and axis. You have access to all parameters, so you you can i.e. read the ip address, axis name or axis number before reading the diagnostic log.

The name which is used under Devices>Drives needs to be unique (like i.e. SN or Mac address) - so S-0-0142 or axis number will not work in general, because they are not unique.

I will forward your feedback to the responsible development teams.

Thanks for the info. I look forward to getting the documentation or some hints when possible.

@CodeKnecht, have there been any updates to this? I did not see any new drive connect app in the latest version of the Apps (VRS1.16). When should we expect this functionality to be available?

I have tested Drive Connect App with SFK drives in the same subnet with CtrlX core.

I just wonder if I can reach also drives which are:

1) in other subnet which are connected to it using engineering port - is Drive App able to look into the subnets from routing table for searching the drives?

2) in other subnet and especially working in sercos bus with drives behind a PLC which acts as a gateway (router) for IP protocol.

The routing bewteen those two subnets are set in CtrlX core and I can ping the drives running in sercos network from the CtrlX Core. I am not able to see the sercos drives in data layer devices tree.

Just for curiosity I also tested connection using DeviceBridge app on same CtrlX core and sometimes the app is able to connect to such sercos drives but sometimes not. I made also a test with the legacy PR21 and IoT Gateway and it looks the same - sometimes parameters are read for a few seconds and suddenly get BAD status.

2) correct EAL connection just a few seconds later from above example looks like below:

I was thinking that maybe there are some ports mapping not properly handeled by PLC (our XM control) when it acts as a router but funny thing is that the same time the ping and routing works well without any delays and breaks.

@aFouraker version 1.16 should be available end of august. See this post.