I see an SDK for developing in node.js in the sdk but the examples are only on the virutal machine. When I try to install the snap on the core I get the following error. Is node.js supported on pysical core?

In snapcraft.yaml, you have to set confinement to strict, otherwise you won't be able to install the snap using the web-front.

In snapcraft.yaml, you have to set confinement to strict, otherwise you won't be able to install the snap using the web-front.

Some additional information on node.js with the SDK:

Until now you are only able to build a Nodejs snap with the SDK for the architecture of your Build environment. So you would need a arm64 environment to build a snap for the real ctrlX CORE Hardware. 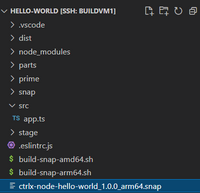 Reviewing the SDK it describes installing the node.js snap to the virutal machine. This snap is set to "classic" by default. My understnding is that a classic snap cannot be installed with the strict confinement. Is there a way to install this on the core?

Is node.js already present on the core? Are you saying if I build the demo node.js snap it will work without further installation or snaps?

Yes, you can build a node.js snap with the SDK and install it on your ctrlX CORE and you don't need to install any additional apps or packages.

Because your snap has all dependencies which are needed for it to run inside. See here for more information on snaps.