How To update ctrlX SAFETY firmware

In the following, we show to you how to update the SAFEX-C.1x ctrlX SAFETY firmware.

All the screen shots are based on:

A connection to the ctrlX SAFETY control via USB serial cable is successfully established. Switch on the control voltage +24 V.
As well, start the engineering tool ctrlX SAFETY Engineering

The update process is still under construction. Enhancements are continuously implemented in the ctrlX SAFETY ENGINEERING Tool, ctrlX SAFETY Firmware and as well in ctrlX SAFETY Hardware.

- Within hardware index AE1 controls, the boot loader will be stabilized for more robustness.

- The firmware update workflow may change with the next “FW
Milestone”.

- Additional Steps during update may be necessary.

- Update via Ethernet – only over EtherCAT (EoE) – is planned.

Please refer always before an update to the Blog “How to update ctrlX SAFETY“ with the latest Version Number in the HowTo area. LINK einfügen AUF das gelb hinterlegte wenn das How to dort liegt!

Normally the firmware update is performed with both together. In some circumstances it may be good enough to update only one of them CPU-A+CPU-B or FPGA.

CPU-A + CPU-B  version parts have to be updated always together!

The firmware download is locked in order to secure that it is only possible to update approved controls. An update of an SAFEX-C.1x hardware has to be registered at BoschRexroth ctrlX AUTOMATION Support.

For the update purpose, the user needs two files. The “firmware data file” and a so called “key-file”.

The key-file enables the download. For every update, a key-file is essentially necessary. 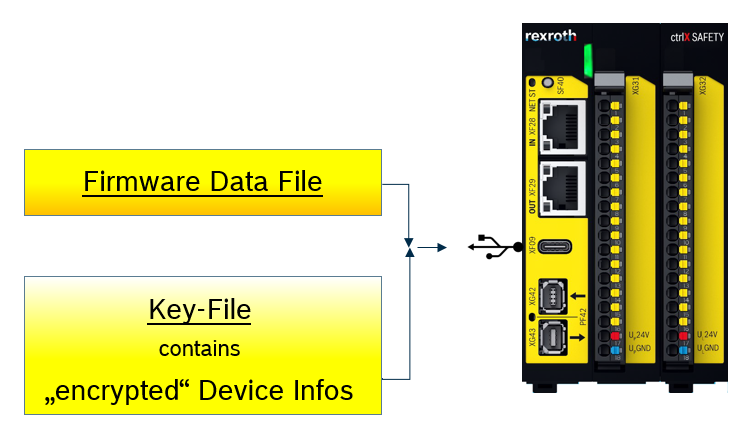 Bosch Rexroth ctrlX AUTOMATION Support generates the key-file if an update of the ctrlX SAFETY Firmware is recommended or necessary.

Fig. 2.: Firmware Update  -  key file contains versions and serial number of the SAFEX-C.1x to be updated

Following information are necessary to request and generate a key file: 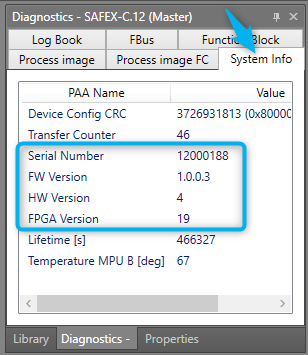 The manufacturing date and HW-Index you find on the type plate. 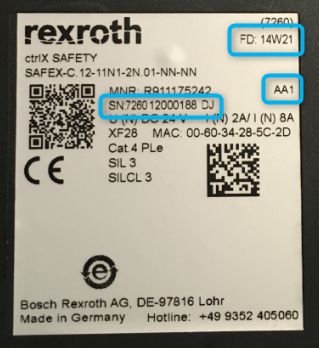 Please send this information per mail to your local ctrlX SAFETY sales technician in order that he can order at Bosch Rexroth Germany Lohr using the so called DC-AE ctrlX AUTOMATION Support to generate  the key-file for you.

When your update is finished successfully, please send a screenshot of your ctrlX SAFETY online “System Info” to your local ctrlX SAFETY sales technician to give feedback to DC-AE ctrlX AUTOMATION Support.

3. Update of ctrlX SAFETY in steps

Attention:
During update, several recommendations need to be followed to avoid unsuccessful updates!

During the update process, the USB connection must not be interrupted at any time!

Attention: Plan your Update, it will last nearly 1h!

Attention:
After successful download, one or more POR power on resets have to be performed. During different long waiting times, the firmware is taken over in the memory and/or FPGA. Do not switch OFF the 24V power supply during this waiting periods.
Follow exactly the steps, described below.

Generate a new empty project with the ctrlX SAFETY control type you want to update!

This is necessary for memory copy processes during the update mainly with the FPGA update. 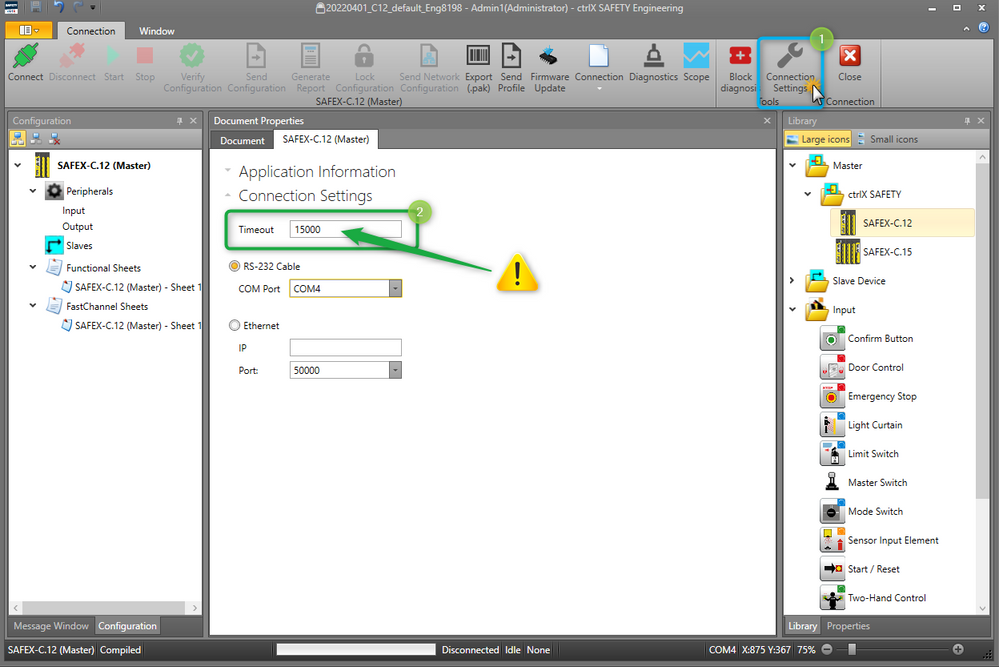 Now select the button “Connect” in order to go online with the ctrlX SAFETY, which has to be updated.

With the latest ctrlX SAFETY Engineering, the selection of the Firmware update button is not blocked, if the Diagnostics is open and running.

The update will not work when “Diagnostics” is communicating from the PC to the ctrlX SAFETY. 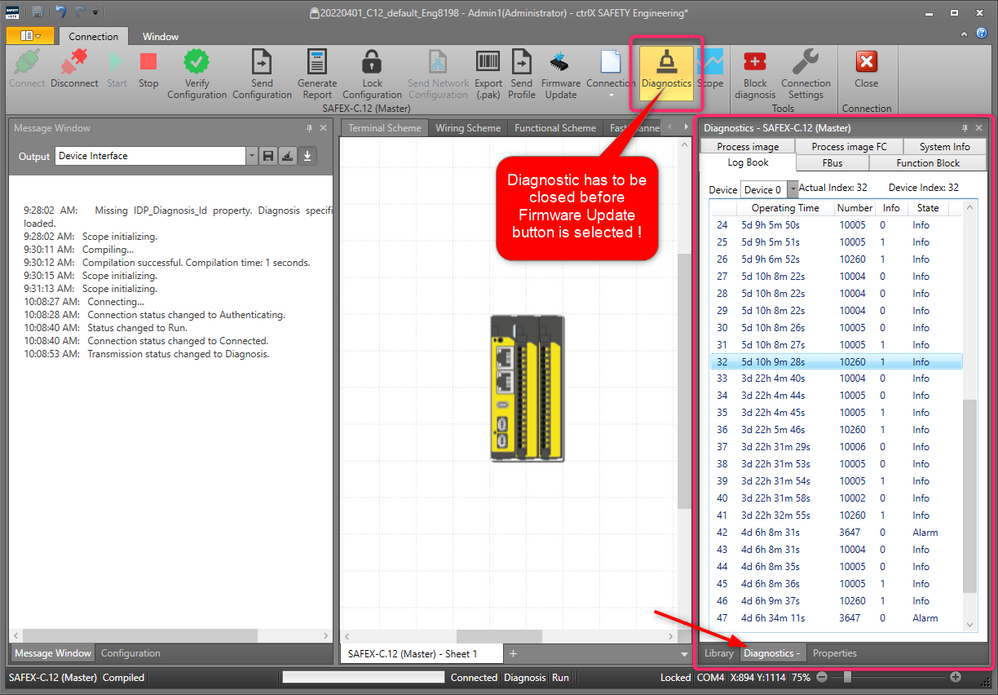 During online connection, the firmware update may be started with the “Firmware Update” button in the online menu band.

Do not forget to switch off your “Diagnostics” before. 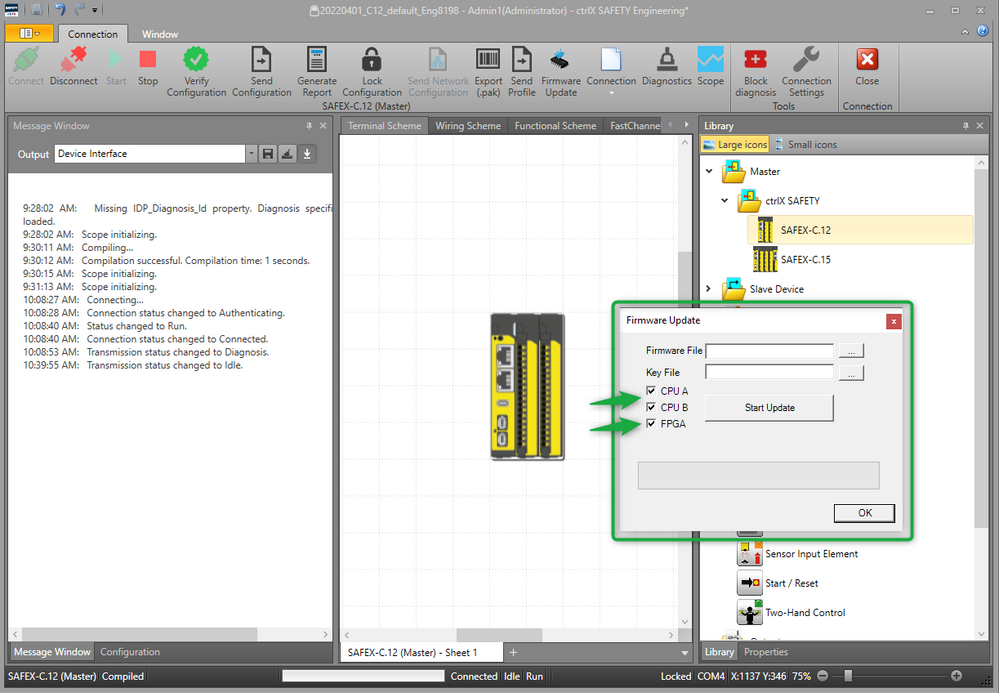 You may select the required Update Steps CPU-A + CPU-B (always together) and/or FPGA, dependent on your Key-file you have.

Select under “Key-file” the suitable key-file to your selection for update steps.

Attention:
An update step by step is not possible with one key-file. You have to perform exactly the selections, which the key-file contents, in one update step!

The following example describes an update of the control in chapter 2.1 Firmware update – shares, files and procedure mentioned above, from Firmware 1.0.0.3 to Firmware 1.0.0.5. Both CPUs are updated, which has always to be performed in one-step. 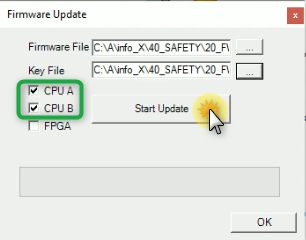 With selection “Start Update” the download process will start.

An abortion is not possible at the very moment– Mind to not select OK during file download!

The light pipe PF01 at the SAFEX-C.1x is changing from green or green blinking at RUN mode to yellow blinking during the firmware download. 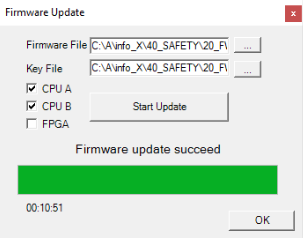 Select the “Close Connection” button to switch the ctrlX ENGINEERING OFF from SAFEX-C.1x

Note depending on the update type, several points have to be paid attention to – refer to next two chapters!

Forbidden:
Do not POR by unplugging and re-plugging the RTB terminal plugs XG31, XG32, XG33 of the ctrlX SAFETY! Switch of the 24V power supply.

After POR, the SAFEX-C.1x needs ca. 15s to update the new firmware.

Attention:
After POR, the SAFEX-C.1x may be switched OFF earliest 15s later only. – Not before!
Otherwise, the SAFEX-C.1x has to be sent back to Bosch Rexroth for service.

The light pipe PF01 at the SAFEX-C.12 after POR is dark for some few seconds. Then a yellow blinking is starting during the firmware update. Ca.12 times.

With a short break in the blinking frequency, it is recognizable that the update of the firmware for CPU-A + CPU-B is performed.

After another 6 yellow blinks during the initialization boot, the SAFEX-C.12 is in RUN mode. PF01 light pipe is blinking or solid green. It tries to get in same state than before the update was started.

Follow next steps in chapter 3.3.3 Feedback the successful update of your ctrlX SAFETY!

In case of update both firmware parts or only the FPGA, after POR the SAFEX-C.1x first needs ca. 15s to update the new firmware – AND – FPGA load additionally behind.

Inside the FPGA the NIOS kernel has to be loaded too, which needs additional time of 2 minutes!

Attention:
When updating FPGA, after POR the SAFEX-C.1x may be switched OFF earliest 3 minutes later only. – Not before!
Otherwise, the SAFEX-C.1x has to be sent back to Bosch Rexroth for service.

The light pipe PF01 at the SAFEX-C.12 is dark after POR for some few seconds. Then a yellow blinking is starting during the firmware update. Ca.12 times.

With a short break in the blinking frequency, it is recognizable that the update only of the firmware for CPU-A + CPU-B is performed.

After another 6 yellow blinks during the initialization boot, the SAFEX-C.12 is in RUN mode. PF01 light pipe is blinking or solid green – in the state before the update was started. FPGA just follows!

Attention:
When PF01 light pipe is blinking green?? or solid green the update IS NOT READY at this moment!
Updating FPGA is still in progress for another 2 minutes!

At the very moment, it is just possible to connect to ctrlX SAFETY ENGINEERING and check the status of the FPGA copy with the “Diagnostics” in the register “System Info”.

The user has to wait until the old “FPGA version” from before the update is displayed. Then the FPGA load is finished.

Select the “Close Connection” button to switch the ctrlX ENGINEERING OFF from SAFEX-C.1x.

After a second POR the SAFEX-C1.x is initializing and booting to RUN .

3.3.3 Feedback the successful update of your ctrlX SAFETY

Check the update success with the “Diagnostics” in the register “System Info”. Take a screenshot and send this to your local ctrlX SAFETY sales technician to get the feedback to DC-AE ctrlX AUTOMATION Support that the information is changed in the quality record of your SAFEX-C.1x control. 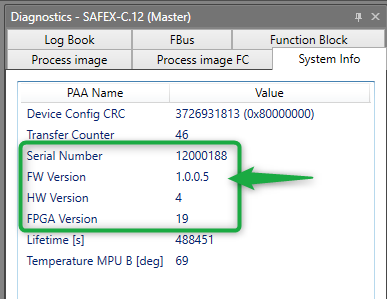 There are several error messages possible during the firmware update. 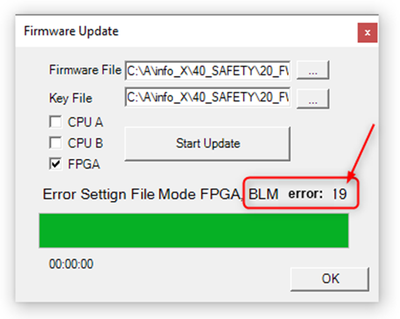 Fig. 16.: Example of a BLM error during update

The update is starting but after CPU-A+CPU-B download during FPGA download after ca 21 minutes the following error appears:

In case of an interrupted firmware download, firmware files are only partly downloaded.

Do not switch OFF the 24V power of your ctrlX SAFETY!

There is a possibility available to restart the download again.

In most cases the USB connection between ctrlX SAFETY Engineering PC and the SAFEX-C.1x was interrupted by e.g. the operating system of the PC.

However, the PF01 light pipe is still blinking yellow, which signals the download mode.

The ctrlX SAFETY gets the “Factory default settings” by downloading an empty project with only the SAFEX-C1.x control type on the working desk in the “Terminal Scheme” register. 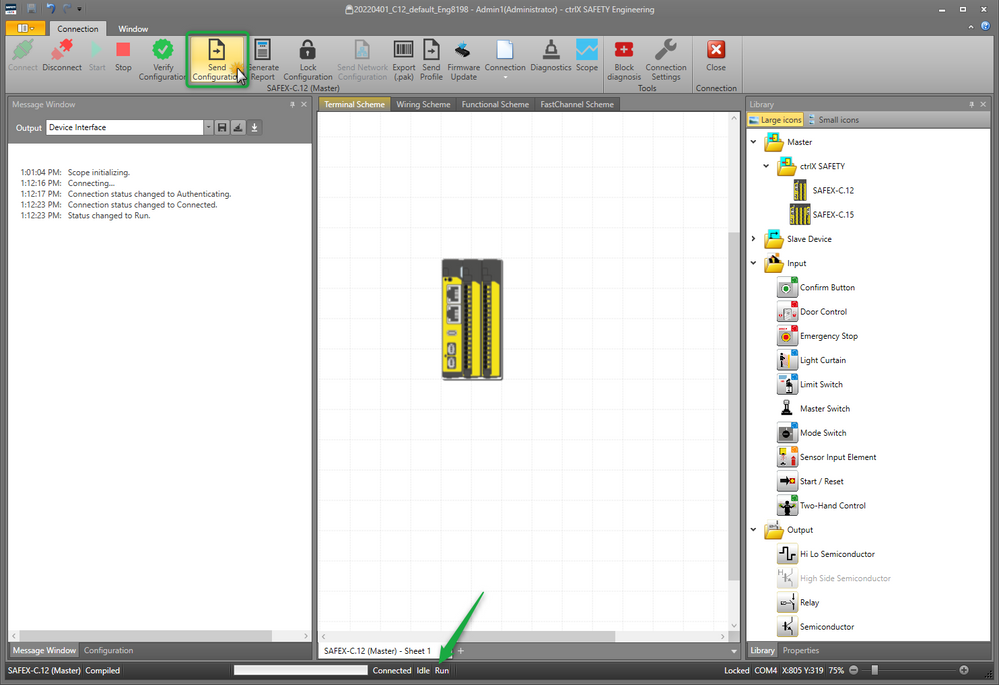 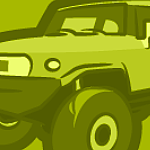