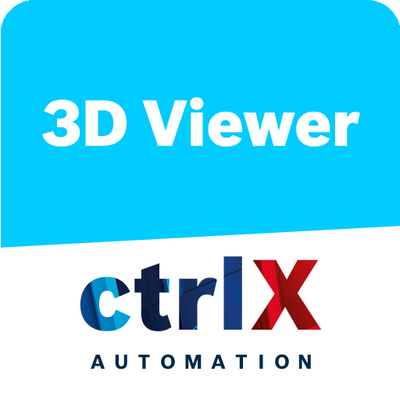 The 3D Viewer App offers the possibility of a 3D kinematics simulation on the ctrlX CORE. The models needed for this purpose contain a description of the axes relationships of a kinematic system, which also references the 3D geometries required for the model in STL format. The axis values for controlling the kinematics model are provided by the ctrlX CORE on the ctrlX Data Layer. The combination of a ctrlX COREvirtual with the 3D Viewer App enables the creation of digital twins of machines and robots, e.g. for virtual commissioning or for programming and validation purposes.

3D visualizations have become an important part of our lives today, because they help the user to understand facts and processes better. Technology is also no longer a problem these days, as even mobile devices now offer sufficient performance for 3D applications. In automation technology, 3D visualizations and simulations of machines and plants have also become standard. In conjunction with virtual controls, it is thus possible to build digital twins of machines, robots or plants, which enable the following applications, among others:

The 3D Viewer App supports the realization of these use cases.

In addition to pure visualization, the 3D Viewer App can also be used for 3D simulation of machine kinematics. The models required for this are created with the aid of additional software, the Virtual Machine Builder. They consist of a tree structure for describing the axis relationships of the kinematics, which also references the 3D geometries (STL format) required for the model. You can also order the creation of simulation models by contacting us at this e-mail address. 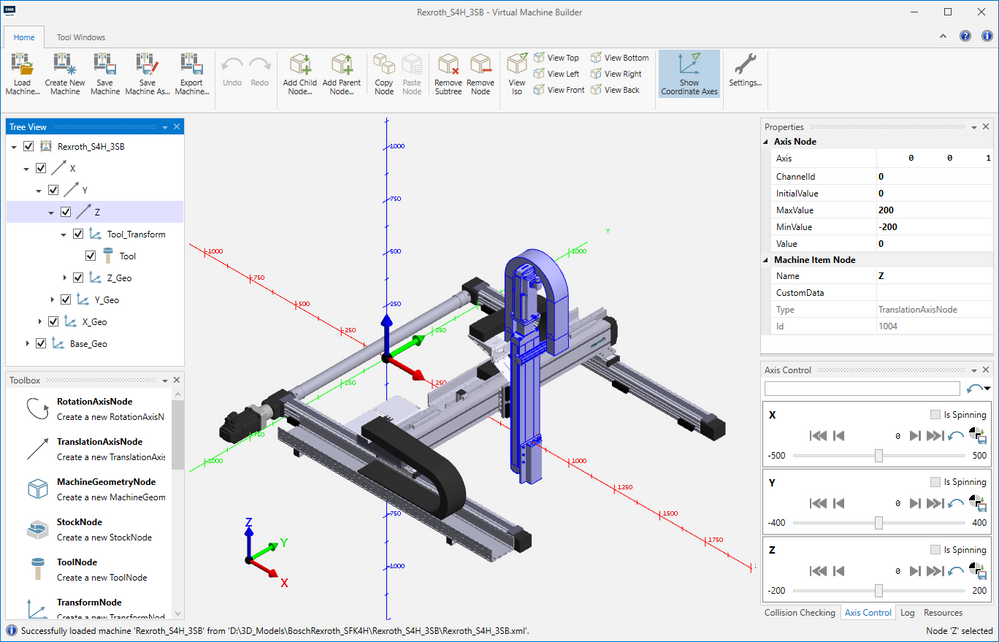 Virtual Machine Builder for the generation of 3D kinematic models

The integrated Model Library of the 3D Viewer allows the user to manage the existing kinematic models. The basic scope always includes the model of a Cartesian kinematics as an example. The user can load further models. Every model appears in a separate tile with the model name and a thumbnail for easy finding. If a model is no longer needed, it can simply be removed from the Model Library. 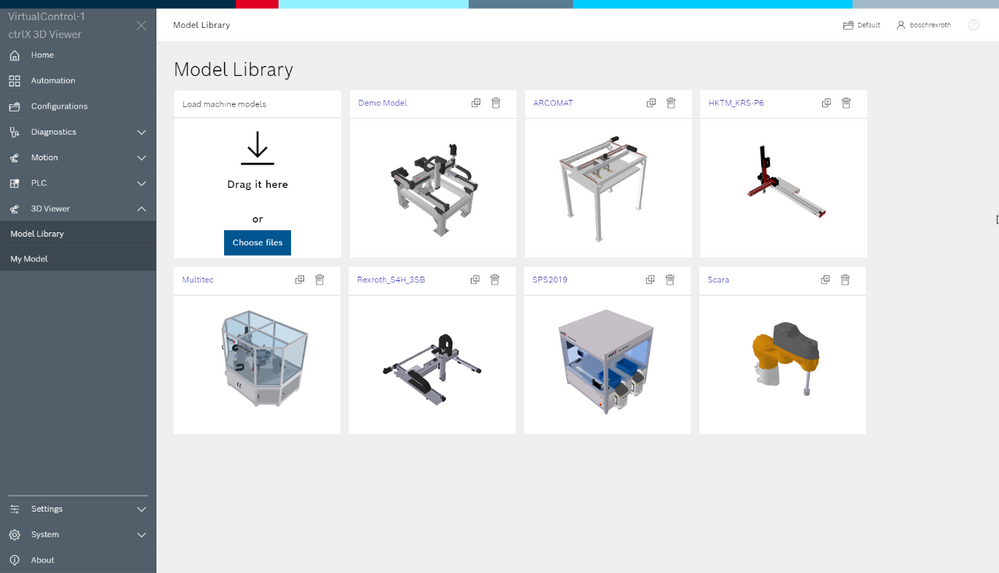 The 3D Viewer App brings its own user interface, which makes the usage of the app very simple and intuitive. The most important component is the 3D graphics window. It can be controlled via mouse or touch operation and visualizes the kinematic models. For a better orientation, elements such as a grid or coordinate systems can be displayed. Via a button bar different views and functions can be selected. Another UI component is the Commands panel for jogging the axes, displaying the axis values or configuring the connection to the ctrlX Data Layer. 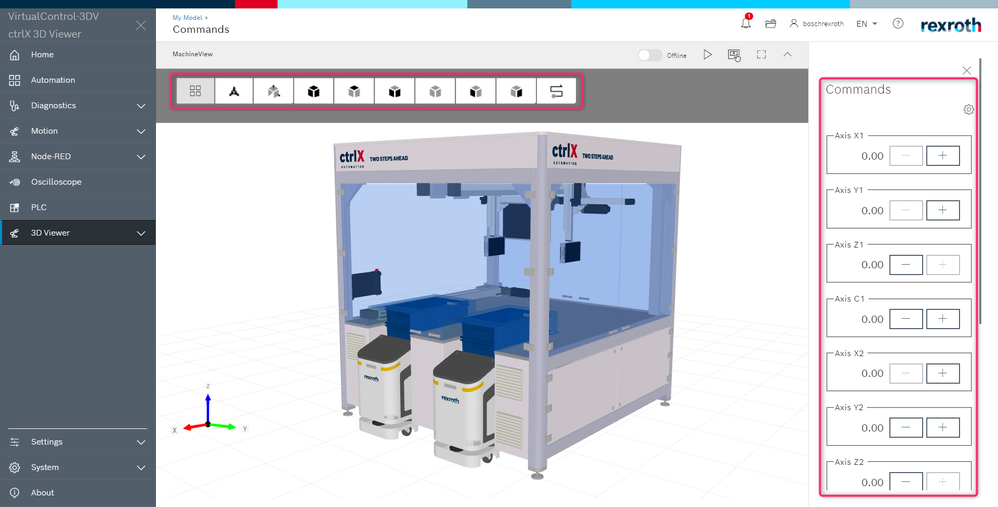 Since the 3D Viewer App is based on web technology, it can also be integrated in customer-specific HMI screens as an iframe. In this way operator screens for visualization of the actual axis position or remote access to the kinematics are possible to realize.

Moving the model in offline and online mode

For moving the kinematic model are two modes available: the offline and the online mode. The changeover between the two modes is done via a toggle switch. In offline mode there is no connection between the model and the control. It can be used for testing the model or trying out the 3D Viewer App. The model can be moved by using the jog buttons or with an automatic play mode.

In online mode, a connection is established between the kinematic model and the control. The axis position values for driving the model now come directly from the ctrlX Data Layer. In this way, synchronous motion of real kinematics and kinematics model is achieved.

A helpful feature for a better visualization and evaluation of movements is the Toolpath. By switching on this feature, the tool center point of the kinematic model draws a line.

One of the great advantages of ctrlX AUTOMATION is the possibility of using virtual controls. The ctrlX COREvirtual is the digital twin of the ctrlX CORE and enables the user to use it e.g. for engineering tasks without real control hardware on a PC. All apps that do not rely on communication with real hardware can be installed and executed on the ctrlX COREvirtual. This also applies to the 3D Viewer App. For example, in conjunction with the MOTION app, it enables the purely virtual configuration, testing and optimization of a kinematic system. Communication between the model and the control takes place via the ctrlX Data Layer. By using two browser windows, parallel work in both apps is possible. 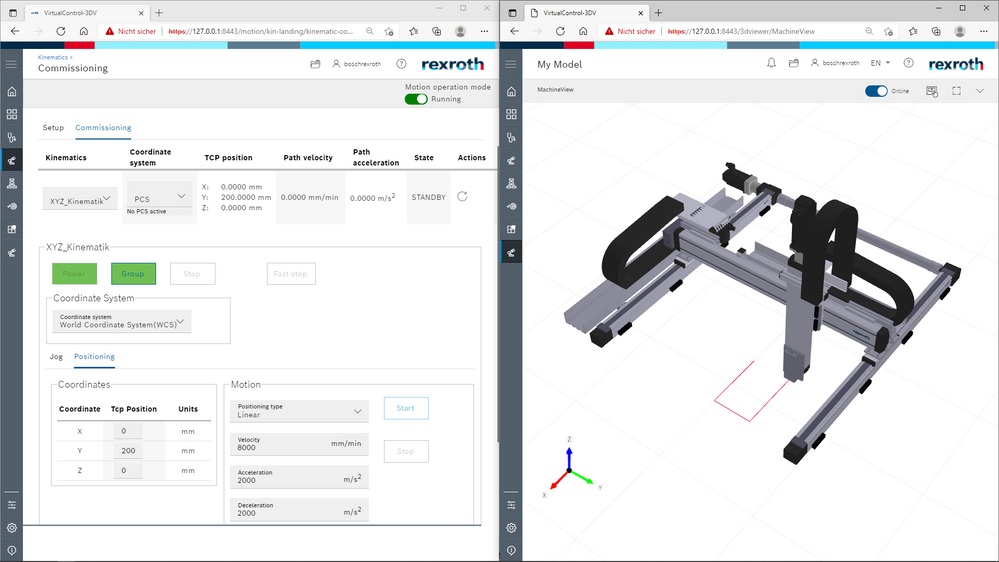 KarstenK
Hi, I am Karsten and I work as a Product Manager in the ctrlX AUTOMATION software team. Contact me if you want to learn more about our solutions.
Editorial work by: KatjaX